Being quite new to the sport of Air Rifle Hunter Field Target (HFT) / Field Target (FT) it was suggested that perhaps I could do some sort of a ‘new starters’ guide, so here we go…

First of all, if you are young, old, male or female it does not make a blind bit of difference! The world of FT is there for all to enjoy, whether it be for fun or competition. Field Target shooting is a sport that has grown in popularity in recent years; it combines the outdoor field conditions of a rough shoot with the target precision of competition shooting.

A course of targets is set  outdoors in lanes of two targets per lane at a distance of 8 to 55 yards. The knock down target will only fall if your pellet goes through the circular ring, which can be 15mm, 25mm or 40mm, and strikes the paddle behind. The targets can be up in trees, in hollows in the ground, half hidden in pipes or behind objects etc anything to make it a challenge to the shooters skill to hit the target. The target is pulled back up (reset) by the string at the fireing point ready for the next shooter.

Immediate advice that I have:

As I have already mentioned, ask questions and listen to the advice given and chose your kit accordingly. What you need to bear in mind is that you might not like the sport after a short period; so until you are certain, think about buying second-hand kit…brand new is not cheap and not necessarily the best!

The sitting position is the most popular as it provides a stable platform however you can lie prone. Ther will be some targets which will have designated positions such as standing or kneeling and these are more challenging. There is no substitute for practice in perfecting your positions and technique. 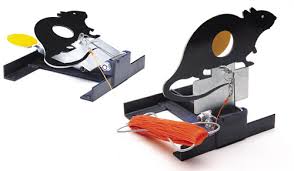 The targets used for FT/HFT shooting are made of metal and are shaped traditionally to look like typical airgun prey –  rabbits, rats, pigeons, squirrels, crows however there are some diamond and circular targets.  Most will have a 40mm diameter hole in them, however there are 15mm and 25mm. smaller, with a metal disc behind which is linked to the paddle that holds the target upright. When a pellet hits this paddle it falls backwards causing the target to fall down. The target has a cord attached which is used to pull the target upright again which resets the paddle ready for the next shot.

OK, so there you have the basics. All that is required now is for you to come to one of our shoots and try it for yourself.

PLEASE NOTE – In Northern Ireland airguns and CO2 guns having a discharge kinetic energy in excess of one (1) Joule (0.737 ft lbs) require to be held on a Firearm Certificate.