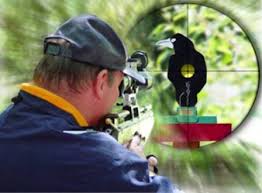 The sport to simplify it is using an air rifle to shoot a metal silhouette target which has around the centre a hole (killzone) on the other side of the killzone is a metal paddle if you get the pellet through the hole it hits the paddle causing the target to fall over (surprisingly quite satisfying) the target has a cord attached so it can be reset. There are usually 40 or 50 targets on a course, these are in lanes each lane will have on average 2 targets. League or competition shoot’s have a time limit of 2 min’s per lane from when your eye goes to the scope. The scoring depends on which class you are shooting, hunter class 2 pt’s for a hit (target falls) 1 pt for hitting the silhouette face plate (target stays up) 0 pt’s for a complete miss. FT gain 1pt target falls marked as an X 0pt’s target stands marked as an O.

The equipment we use is really quite varied the majority of shooters use hunting air rifles so you will see all the major manufactures such as air arms, daystate, falcon, theoben, and ripley ect. Power level’s for the hunter’s varies from 12ftlbs up to 40ftlbs in any calibre. Hunter can use any scope even iron sights but can not adjust the scope once they start the course.

There are also FT air rifles used these must comply to a maximum power limit of 12ftlbs any calibre is allowed but most use .177 as this has the flattest trajectory at the power limit imposed, where they differ most from hunter rig’s is the scopes, which can be used to range find the target, high magnification and good glass is a requirement if you want to do it with any success so they tend to be pretty big.

The clubs shoot on Sundays. There are winter and summer leagues as well as lots of practice shoots.

If you fancy giving it a try, contact one of the clubs they are always happy to hear from anyone interested you can arrange to go down to the club and see if it’s for you, if you have an old air rifle bring it along there’s plenty of help and your sure to have a great time.